Life is an endless cycle – the turning and returning of beginning and ends… the one always spiralling onwards, and then within itself, until it starts a totally new spiral, after reaching a type of wall.  Once it has spiralled through that wall, it then continues in higher forms… the spiralling circling movement ever going upwards and beyond what has ever been…

This planet too is was birthed within a spiral of time and thus has moved backwards and forwards within this spiralling worm-hole – with one single unique difference – and as yet it is the ONLY planet who as ever managed this: – it fell BACKWARDS and into the unknown and unchartered territory of the 3D world, and this from the upward spiralling of the 7th – where it hit a wall.  Yet, instead of the momentum carrying it forward, at that time, because of self-destructive patterns emerging, it managed to fall back and into a black void, and thus from there hit rock-bottom, which then anchored it firmly into the physical, 3D world….

This is one of the reasons, that this planet is attracting so much attention from other highly advanced and evolved Beings at this time.  It also a reason why so many old souls have incarnated, and those attached to certain SOUL GROUPS, like the Illumined Ones, also known as the Ancient or Shining Ones, and mostly because this soul group (more than the others), has always acted as co-creators of this planet, as its guardians, and most of all, as those who held the Light steady, at that time, when all of this happened.  In a sense they are here to assist the evolvement now into higher states of consciousness and to ensure that this time round, the same does not happen – that the planet and its people manage to spurt through that wall and into the higher evolutionary spirals once more…

We are such cannot always understand this cyclic form of all life – yet, when we look at our own DNA strands within each cell of our body, this spiral repeats itself.  It is there in all geometrical patterns nature supplies in bounty – one has only to gather seashells to be reminded of this.

The Ancient Ones used to paint the spiral everywhere, as a reminder of this – and the Celtic art reflects it everywhere.   The Serpent was often used to also symbolize this, but its deeper meaning is the kundalini, the life-force which awakens from deep within and then goes through the energy wheels (again the spiral) of the body, to awaken the quest to the higher states of consciousness…

The Ancient Crystal Pyramid Temples were built in such a way, that this kundalini, or spiralling energy would be charged, via the crystals with which the temples were built (acting as a conduit), and then connecting via the temples, to the Earths energy centres and the Web of Light and then also, via the apex, to the Cosmic Kundalini energies.  In this way, these massive Temples, then truly were powerhouses – or like massive turbines to be used in whatever way the Temples were dedicated to be used for.

Each Temple had a different colour, for it reflected the qualities of the Cosmic Ray it was working with, and mostly these came in pairs of 12, each one representing the physical bodies’ energy centres of chakras, and then the 13th unlocked the rest.

The first of these massive Crystal Pyramid Temples, and the spiralling energy they emitted, were built on what is now the African continent – but NOT Giza!  (Egypt was not used at all, and those pyramids only were built thousands of years later with much less advanced technology, and then because Atlantis was sinking, and the knowledge had to preserved and the pyramids in Egypt to serve as a reminder to mankind and then also for another totally different reason than most people believe they were built for).

The African continent in those days, formed the MIDDLE of what used to be ONE SINGLE CONTINENT (later the first land masses started to sink under the sea, and the continents, started separating from the African mainland….)  Thus in reality AFRICA HOLDS THE WHOLE WORLD TOGETHER and thus Africa holds the Keys for the rest of mankind – yet it is not only Africa, but also Antarctica.  And it is NOT the top part of Africa that holds the central keys,  THE SOUTH-EASTERN PARTS OF AFRICA HOLD VITAL KEYS TO THE UNDERSTANDING AND UNLOCKING OF THE ANCIENT HISTORY OF MANKIND AND THE REMEMBERING THAT WILL NOW COME TO THE FORE.

In this, this part of Africa has always been linked with South America and the Islands off shore between the two continents and Antarctica,  to the west, and then to the Islands to the east – Madagascar, Mauritius, Sri Lanka and then Australia and New Zealand.

Yet, there is more to it.  I was made aware of something very interesting this past week, when a Parks Board Officer mentioned that scientific studies have indicated the all the eastern rivers in South Africa, are slowly shifting WEST.

What most people are not aware of is that Africa holds more secrets than any other continent, and one of the best kept secrets is that which is HIDDEN UNDERNEATH THIS PART OF THE WORLD.  Again, this has to do with certain aspects of the South-eastern part of Africa, which I will not go into here (forms part of my book) – but suffice is to say, that this is preserved in the Ancient KNOWING of the African people – but only a handpicked few ever held that knowledge, and those who did, have all faded away.  This was never written down, in any books, or in any way – yet this knowledge was hidden so well, that only when a certain evolvement in humankind happened, then the right souls would have access to these.

Now, coming back to this time – as the solar flares are starting to become more and more potent, the INNER Crystal Pyramid Temples, and those vast crystal deposits hidden inside the Earth, are being reactivated.  This is simultaneously affecting certain energy centres within this part of the world and others – Glastonbury Tor is one of those, and Machu Picchu another, then there are others hidden deep in the Amazon jungle and deep within the centre of Africa….

All of this is culminating to come together within a certain timeframe, when a lot of the codex’s that are held by the Native American people will be revealed, or re-membered.  The other energy centres lie in heart of Siberia, and then also in those sunken lands in North Sea and tying in with Greenland and Iceland, and the north of Scotland and Ireland.   The rest lie in the Alps, in the Pyrenees and Bosnia.   Then the next ones are hidden deep in the Himalayas and underneath Jerusalem.   Others are in those sunken lands near Japan, Honolulu, Fiji, and in New Zealand.

The Northern hemisphere is going through its own changes and this has to do with the huge energy centres in the Pacific around Hawaii.   Here the spiralling energies move clockwise.  The rest in the pacific which are attached to the Southern hemisphere move in anti-clockwise, forming vortex energies there which are going to make itself more and more felt as the ancient Crystal Pyramid Temples under the sea and on the Islands start revealing themselves.

The other area where massive vortex energies are being formed is in the South Eastern Parts of Africa, and then this is linking up, through vast underground channels to Machu Picchu and then also to the very heart of the earth.

All of this is releasing massive energy waves, which is affecting us all.  With the Solar Flares releasing AND CONNECTING TO THE EARTH’s ENERGY CENTRES INSIDE THE EARTH AND THE COSMIC ONES OUTSIDE, IT IS RE-CREATING THE PLANET AND OUR SELVES!

It is the sensitive ones who need to waken up now, who are getting awakened and led to the right spots.  In soul readings I am finding that my own soul group are being led to me and then I seem to identify them and reconnect them with their higher calling – this by design and not accident.   I do the same for other soul groups, as a lot of them have been working closely with my soul group and with this planet – and have done so from the beginning.

All in all this spiralling energy is now making itself felt and this is the new energy that this planet will have to relearn to use in myriad of forms in the New Age.    At the moment we are not yet advanced enough to know how to do this – as with the use of this, the mantle of responsibility comes, to use it in the correct manner and for the greater good of all. 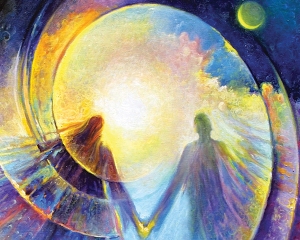