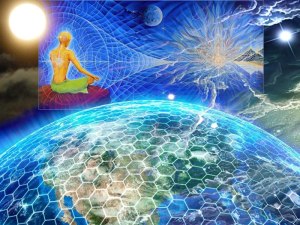 As above so below…
What happens in the macrocosm…. is happening in the microcosm….
Whatever is created in one form or another – will always have a reflection somewhere in the whole of creation. It can be no other way.
In the beginning, even before light was born, there reverberated through the cosmic whole – SOUND. Thus then from the SOUND of heaven, a spark of Light was born, and thus all sound frequencies, have a colour ray which will vibrate at the same frequencies.
The sounding of God’s name, in that we sound the OHM, or in the hearing of the sounding of the Sacred name of God, YHVH through music, as some artist have recorded, we tune into the sacred sound of God itself – therefore creation.
A combination of chords reverberating throughout the cosmos is an immensely powerful source of sheer creative energy. There are harmonic frequencies of sound, which are unique to each galaxy, universe, solar system and star system. Thus, if one wants to tune into a certain galaxy, one then has to understand how to tune into that harmonic frequency.
Some sound frequencies of the harmonic frequencies are many octaves of sound higher than the human ear can hear. Some of these super-sounds can be felt though through the vibrations which all sounds give off.
I remember that my father always told me that old Zulus (meaning the ones who still grew up without the modern gadgets like cars), would simply put their ears to the ground, and could pick up the coming of horsemen many miles distant, via the sound vibrating on the earth.
The self-same Zulus, had a bush telegraph going which would outdo the telephone for many years (it needs no radio reception either.). They used to be able to project sound via standing on the top of mountains and relaying messages, and also be means of sounding the drums….. In this way their bush telegraph for many years was far more efficient than any telephone and they knew more about what was going on – and any of the settlers at the time.
I do believe that with the immense sound pollution that we have had, with the advent of mechanical things, that we have lost a lot of listening and inner hearing abilities, which should come naturally, like a 6th sense.
However, at the moment with the immense solar flares and the cosmic storms raging an interesting thing is occurring. There is now an opening up or a massive portal in this universe, which is opening up the influx of cosmic harmonic SOUND to move in at a higher frequency rate – as the cosmic energies have already penetrated and made holes in the protective shield around the planet (which had deliberately put in place by those who wished to keep mankind in a type of time-warp bubble), the cosmic sounds can now penetrate deeply into the Mother Earth again.
The Pyramids were programmed to respond to certain frequency sound vibration, which is much higher than the Schumann Resonance. It cannot be heard by human ears and it activates certain mechanisms within the crystalline structures of the stones itself. The stones were carefully selected because of the crystalline content, and some have had their outer shell removed, they still have been programmed to respond at a certain very high frequency band. I will not go deeper into this, for it is connected with a lot of other things, but this is one of the reasons, why one will feel this vibration in some part of the body – whether this is affecting the alpha and beta co-ordinance in the brain, or the physical body in some form or another.
These Cosmic Harmonic sounds are already starting to reverberate through the stone circles and the monolithic sites in the world – some of these have been forgotten about and are underground. It is working through the ley lines and the Web of Light.
It will have an immense effect on the Sphinx itself, and all that water which was pumped into the underground levels underneath the Sphinx, will start giving immense trouble – that whole site was never meant to be flooded like that and it will cause major havoc in Egypt, because of man’s own ignorance as to the cosmic laws and especially those which are in effect there and have been in effect for millennia.
Most people do not understand that if we expose ourselves to jarring or discordant sound, we are damaging our own physical bodies, never mind our ear drums. We bring dis-ease into our bodies and we start becoming angry, easily agitated and aggressive. Anyone who has ever had to work in a sound polluted environment will tell you this. One can literally go mad with discordant and dis-harmonic sound.
Bring in the higher frequency sound of the crystal bells for instance, and the human being will immediately raise its frequency. Listen or chant the name of God, and the frequency will up even higher. We can fine-tune ourselves to the immensity of the Divine Frequency once we learn how to do this and we allow ourselves to uplifted by healing sound.
When the human beings re-learn to move 33 x 3 octaves higher than what is known in sound frequencies today, it will enable them to tap into the cosmic harmonic frequencies, then all ailment associated with the mind will start falling away, as this brings in the balancing between the left and right brain and brings in the full activation of the pineal and pituary glands – without any artificial aid whatsoever – or stimulants. It is sound that works with our mental and emotional bodies, and it is to sound that they respond.
This will truly be the greatest journey of rediscovery for mankind into the realms of the cosmic whole