via The New Cosmic Portal opening up and immense new wave of cosmic changes is upon us…..

There is a massive cosmic portal opening up just in between Jupiter and the earth, which has been closed for millennia. It looks something like a wormhole, and it brings for the first time in millions of years the return of a mass cosmic consciousness which is embedded in certain star gates in this solar system.
The mechanisms of this massive field of consciousness is that of the ancient beginnings when the first galaxies were formed, the first 12 master galaxies, and then, when the wars of heavens started, this massive portal was closed down, and moved towards those new galaxies forming in the outer reaches of the cosmic whole.
What is will be doing is affecting the pyramids and pyramids grids inside, on the surface and those under the sea, and bring about the acceleration of the rising of consciousness on this planet.
It will trigger immense memory banks in our inherent DNA and molecular memory banks, and bring about the a massive shift in the way we perceive our material world, as a lot start disintegrating which once held form, while other forms of life, which have been living alongside us, in different dimensional states, and also inside the earth, will now for the first time be visible to those who are tuning into the cosmic impulses emitted by this massive portal.
This portal is directly linked to the Bear constellation, for it was one of the first galaxies to truly evolve to the Super consciousness which brought about a massive shift in the greater cosmic whole, and later then influence life on Sirius, on Andromeda, the Pleiades, Arcturius, Orion and Milky Way Galaxy, as well be Pegasus, Taurus and Leo.
It will start affecting us, and the earth energy grids open up. It is very high frequency energy which cannot be detected as yet by human measurements, as it vibrates at a frequency range which is out of our orbit. It will bring in the activation of the synopses within our latent brain – in others words those parts of our brains we have not used for thousands of years.
It will bring about a sudden opening up of talents, faculties and abilities which will enable us to make a total shift of consciousness within a very short span of time, as the planet is now ready to step up in consciousness and is thus pulling us into a much higher frequency band.
It means that electronic equipment will suddenly start malfunctioning and satellite communications will be affected. It will hone in on the lower frequency bands which will slowly and surely start disintegrating and thus cannot function any more in that very slow frequency rate it used to function in.
It will bring about a mass movement into the heart energy spaces which will then in turn disintegrate old patterns, which are also ancestral patterns and most of all old thinking patterns which no longer serve this planet, as this energy field is now penetrating the existing energy matrix and it is now shifting the whole field.
As this brings tremendous cosmic fields of new energies in, which together with the cosmic solar flares emitting from sun – which is also now more and more affected by this portal opening up – it will affect our daily lives in the subconscious field as we start understanding more and more that the old structures, the old lies, the old control mechanisms now fall away and the new start forming which is of such high frequency, that the old cannot move into those fields.
As we move into the highest truth and integrity of our own soul and its inner guidance system, we will receive help from those in the higher dimensions to incorporate the changes and thus to move with this field and move into the higher states of consciousness.
It is therefore imperative that we continue with the clearing of whatever comes up in our memory banks, whether this be personal, family and collective clearing. One will only feel immensely disorientated if one is not willing to do the inner clearing and go with the cosmic flow.
What will most be affected is the way of thinking and way the science will finally understand that all thinking without incorporating the heart centered living and an holistic approach is but wishful thinking.
As we step higher in the frequency bands and consciousness we step more and more into the co-creator role. Yet, this can only be done when we start adhering to the cosmic laws and are in harmony with this and thus learn to flow with the cosmic frequency bands and become one with these.
Expect then for changes to escalate and for more changes to come in. Nothing is settled anymore. All is in a tremendous flux, and all is busy dissembling and forming something new.
Hold onto nothing. Attach to no-one and nothing. That does not mean you cannot love someone – just do not attach. Learn to go with the flow and not to resist it.
You will only feel intense pain if you resist this massive cosmic wave of disintegration so that integration on a vast cosmic scale can occur.
It is time for the New Age to make itself felt, and none more so in these higher cosmic frequency bands.
(Judith Kusel) Photo: Aquarius Visionary Artist.

The Cosmic Dance of the Twin Flames. 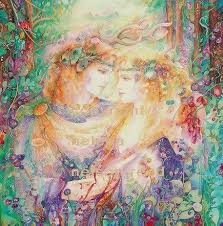 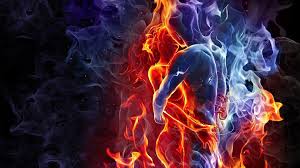